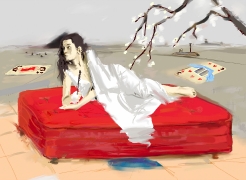 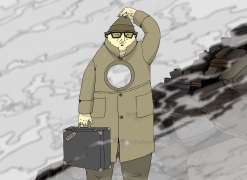 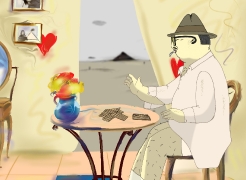 An aging man leaves his wife and sets off on his way to Fujiyama, the mountain of his dreams.  Fujiyama is not his destination alone, though – thousands of people striving to make it to the mountaintop bustle about, each carrying his suitcase.  The mountain itself consists of hundreds of thousands of suitcases.  The inexorable climb to the top reveals the background of the entire exercise to the main character:  the suitcase of everyone that reaches the top bites their head off, and the lifeless corpses fall into a crater.  Prior to that, though, the suitcase sings an incredibly beautiful tune with a woman’s voice, from which those striving for the top gain ever more inspiration.  Our hero, though, makes an unprecedented decision – he tosses a burning cigarette into his suitcase and then throws the burning suitcase into the crater, causing an earthquake.  The mountain rips apart, the earth swallows thousands, entire cities are destroyed in the ruins of card houses, suitcases and headless corpses fly through the air.  But the man makes it back home.  His wife’s gigantic breast no longer moves, however – it towers before him as a lifeless white mountain.