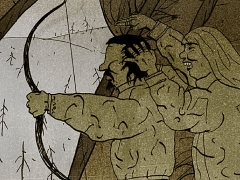 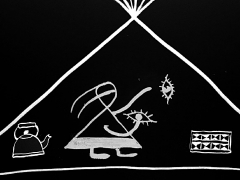 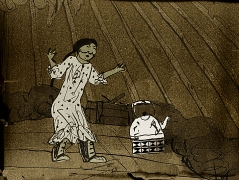 THE EYELESS HUNTER. A KHANTY STORY

A Khanty man went hunting but did not bring home any catch. A wife stealthily followed her husband into the forest. The hunter lay down, took his eyes out and said, “Semlek re-rem-rem”. The wife seized the husband’s eyes. The next day an elk was trotting by the camp. The hunter killed the elk. Later the hunter entered the conical tent where the wife secretly ate the meat. The wife thought that her brother-in-law had come and covered her face as it was the Khanty custom to avoid husband’s male relatives seeing the wife’s face. The wife complained that her husband was lazy and said that she had hidden his eyes in a box. They began to quarrel.