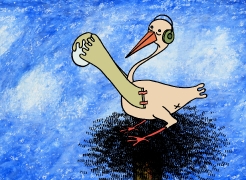 Superman, who has spent his entire life defending justice and fighting against evil, has grown old.  Superman has decided to add even a little color to his years as a senior by finding himself a lover who is capable of flying like he can and who could bring forth children.  The film Superlove is a story of one-sided love between Superman and a stork.