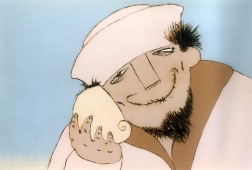 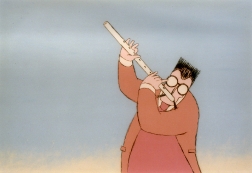 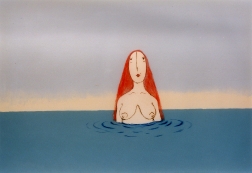 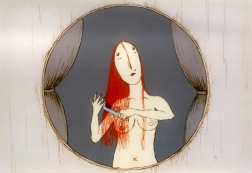 The animated film BERMUDA tells the story of the life of a seaman with a wooden leg and a mermaid living in the midst of the sand dunes of a dried-up sea.  The mermaid is completely dependent on the seaman, who brings her water every day.
A flute-playing centaur enters the routine life of the seaman and mermaid.  The centaur and mermaid fall in love.
The seaman with his wooden leg decides to destroy the newcomer, but along with the centaur he destroys his former position of absolute power over the mermaid and becomes totally dependent on her.
This is a drama involving three characters, neither of whom are entirely good nor bad.  Characters who long for significant changes always become bogged down in their own past when those changes arrive.  Fear of the future makes the characters ridiculous, yet at the same time human.
BERMUDA is a film about love.